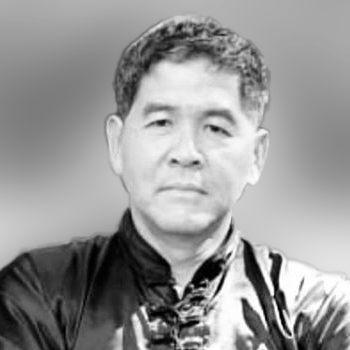 My name is Raymond Wong Chung Man, I liked Kung Fu from a young age. I used watch the Wong Fei Hung movies and when I was around seven years old my older brother taught me some basic Hung Kuen techniques. My brother used to work in the Aberdeen area where he learned martial arts from master Leung Jin Fai. Later my brother got to know about my future teacher Leung Kam Kwong, who was teaching in Yau Ma Tei. In 1970 my brother brought me to Leung Gam Kwong’s school to become master Leung’s student. At that time, I had some basic knowledge in martial arts so master Leung really noticed me and was extra strict when teaching me. He also taught me bone setting and how to read books about Chinese medicine.

Within two years I had already learned most of the forms and I had also learned some applications, body movements and footwork. My teacher Leung Gam Kwong explained all of these things to me. This allowed me to grasp many important factors of Hung Kuen. In 1972 I started being an assistant instructor at master Leung’s school, where I got the opportunity to start teaching other students. In the autumn of 1974, my teacher was invited to teach Hung Kuen and Lion Dance on Cheung Chau Island. In the seventies, the ferries to Cheung Chau Island were not as frequent as they are today, so my teacher brought his whole family and moved to Cheung Chau Island. As a result, he closed the Yau Ma Tei school and I started going to Cheung Chau for one or two days a week. When I was on Cheung Chau, I continued to help my teacher as an assistant instructor. In those days, there were many neighborhood associations and lion dance associations on Cheung Chau Island, these associations asked my teacher to help them with different kinds of celebrations. Of course I went and helped in the celebrations. At the same time I was able to meet many seniors within the martial arts community.

In the winter of 1974, a good friend of mine, Chan Ho Yuen opened a martial arts school in To Kwa Wan. He asked me to teach Hung Kuen there twice a week. A martial arts uncle of mine, called Fok Gan, asked me to teach Hung Kuen at the YMCA, where I taught once a week. In 1977 after I got married, I had to earn money to provide for my family, so I stopped teaching. However, I continued to train on my own, it was just that I did not have the time to teach Kung Fu.

Every year when there was a celebration, for example Tin Hau’s birthday or Gwan Dai’s birthday, I would help my teacher and martial arts brother to help in the celebration. We would perform lion dance and martial arts. In the winter of 1991 my teacher informed me that a student of Lam Cho asked him to perform lion dance at Lam Cho’s birthday. We started performing the lion dance in 1992 and we continued to perform at Lam Cho’s birthdays until 2009, when Lam Cho celebrated his 100th birthday.

Since my economic situation changed I started to further my Hung Kuen studies at Lam Cho’s martial arts school, this was in 1995. Later, in 1999, I began to teach Hung Kuen again at Chan Ho Yuen’s martial arts school. I brought my own students to perform at Lam Cho’s birthday in 2001. My students performed lion dance and martial arts. I learned from Lam Cho between 1995 to 2009, a total of almost fifteen years. Lam Cho often gave me corrections and talked about the history of Hung Kuen as well as anecdotes about Lam Sai Wing. Lam Cho would also talk to me about other martial arts and their characteristics, so I got to know masters of different styles of Kung Fu. I used to test my techniques and exchange with practitioners of various styles.

In 2010 I got reconnected with my classmate from elementary school. His name is Cheung Zan Dung. He introduced me to the Choy Lee Fat master Poon Sing. Poon Sing gave me some corrections when it came to the applications, body movement and footwork of Choy Lee Fat. This gave me a better understanding of martial arts. The reason is that my teacher Leung Kam Kwong learned from a Choy Lee Fat master in his prime. This master was called Chan Yiu Wun.

In 2012 I started traveling to Europe to teach Hung Kuen. My first trip was to Holland. In 2013 I went to Germany, which I traveled to many times. I have also been invited to teach in Sweden, Serbia and Brazil. These days I teach martial arts at the Chung Ying Association. I have been invited to perform Hung Kuen in the following countries and cities: Singapore, Malaysia, the Phillipines, Hunan in China, Taiwan, Guangzhou, Foshan, Panyu and so on.